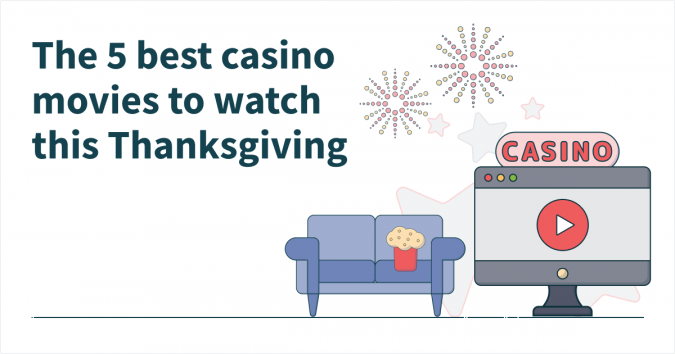 The big screen has brilliantly portrayed the hustle and bustle of casinos, and these movies have delighted and saddened us in equal measure. Online streaming giant Netflix has an extensive range of casino-based films, and here are five of the best ones you just can’t ignore this Thanksgiving.

There is something inherently appealing about casinos. Portraying the dark underbelly of Las Vegas gambling life in the 1970s and 1980s, Martin Scorcese directed this film. Starring Robert De Niro, this tale of greed, deception and money, makes this movie a highly thrilling watch.

Interestingly, most of the dialogue between De Niro and Joe Pesci were improvised, and IMDB reviewers were enamoured with the movie, with one claiming that it was “underrated” and “undervalued”. Sharon Stone played the role of Ginger, and it was another role she excelled in after coming off the back of being the devilish femme fatale in Basic Instinct.

James Bond films always have a certain allure about them, and Casino Royale is one of the most under-rated in the Bond franchise. The stakes are high in this one as Daniel Craig, who is cast as Bond, tries to stop his enemies from laundering money.

Intriguingly, Craig rejected the part of Bond, but after reading the script, he quickly changed his mind. There are also some memorable quotes stemming from the movie, such as when Bond asked Vesper: “Why are those people who can’t take advice always insist on giving it?”

This movie plunges into the sad depths that gamblers sink to due to their irresponsible gambling. There is something remarkably gripping about the film as the professor, who spirals out of control with his gambling habit, tries to get himself out of a jam.

Mark Wahlberg plays the lead role of Jim Bennett, and what you perhaps may not have known, is that Wahlberg dropped 61 pounds for the movie. The thinnest he had previously been for a film was Boogie Nights, which was released in 1997.

A nominee of the Edgar Allan Poe Awards, Croupier has a special place in our hearts.

Starring Clive Owen, this film sees how an aspiring writer accepts a job as a croupier, and how he becomes consumed by the casino world. Although this film sat on the shelf for two years before it was released, it was well worth the wait.

Based on the true story of Olympic skier Molly Bloom, who became an FBI target after running a high-stakes poker game, this film was nominated for an Oscar, and it’s not hard to see why.

With an average score of 8/10 on IMDB, Jessica Chastain gets a lot of the plaudits as Molly, and some reviews described her as “phenomenal”. The ability to draw empathy from her character makes this a real knockout.

Watch at Your Pleasure

At Netflix, there is a growing library of casino movies, and we truly suggest you add the aforementioned movies to your wish list! And to bring out the full gaming experience in you, check out some of these real money online casinos. We promise you won’t be disappointed.