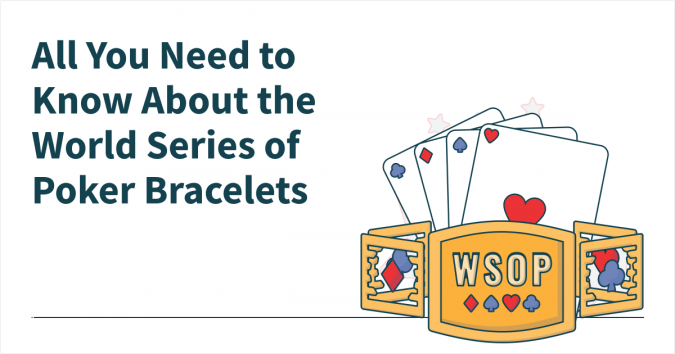 The highlight of the live tournament poker year is undoubtedly the World Series of Poker (WSOP). Players from around the globe descend on Las Vegas in the hope of bagging a coveted WSOP bracelet. Here’s all you need to know about the most famous prize in poker.

How do you get a WSOP bracelet?

Can anyone win a WSOP bracelet?

Yes, anyone who buys into a World Series of Poker tournament has the chance to win a bracelet. Be the last man (or woman) standing in an event and you’ll join the exclusive club of WSOP bracelet owners.

How many bracelet events are there at the 2021 WSOP?

There are 88 bracelet events at the 2021 World Series of Poker in Las Vegas.

Is there a special bracelet for the winner of the WSOP Main Event?

The winner of the showpiece tournament of the World Series of Poker, the $10,000 Main Event, usually wins a uniquely designed bracelet as well as bundles of cash and the unofficial accolade of being the game’s world champion. The 2012 Main Event bracelet for example was made from 14 karat gold and encrusted with rubies for hearts and diamonds, and black diamonds for spades and clubs. Nice.

How much is a WSOP bracelet worth?

Each bracelet itself is said to be worth around $5,000. It’s the kudos from winning a WSOP event rather than the monetary value that make these prizes so coveted though. The design of the bracelet changes each year.

Which player has won the most World Series of Poker bracelets?

Phil Hellmuth aka the ‘Poker Brat’ is currently out in front with the most wins at the WSOP. He added a 16th WSOP bracelet to his collection by taking down the $1,500 No-Limit 2-7 Lowball Draw event at the 2021 World Series. All-time greats Doyle Brunson, Johnny Chan and Phil Ivey are next on the list with 10 bracelets apiece followed by Erik Seidel and Johnny Moss on nine. The highest non-American on the list is Canada’s Daniel Negreanu who has six bracelets.

Who is the best poker player right now?

Hellmuth might have the most WSOP bracelets, but most judges regard another Phil, Phil Ivey to be the best poker player in the world. A fearless cash game player, he’s been involved in some of the highest stake games in the world in Macau.

How many bracelets does Phil Ivey have?

Who is the most successful poker player of all time?

According to HendonMob.com, Antonio Esfandiari has won the most money at the World Series of Poker. The Tehran-born pro has career WSOP earnings of over $21 million. The Magician pocketed $18,346,673 after winning the $1 million buy-ins WSOP Big One for One Drop event in 2012. He has also won two other bracelet events.

Who is the best female poker player in the world?

For a long time, this accolade went to Vanessa Selbst. With career earnings of almost $12 million, she has scooped almost double her closest rival, Kathy Liebert. Selbst shocked the poker world by retiring from the game in 2018. Among the best female players now are Liv Boeree who was won WPT, EPT and WSOP events and Mario Ho, who has over $4 million in career earnings. A shout out too to Norway’s Annette Obrestad who was the first winner of the WSOP Europe Main Event in 2007, aged just 18!

Does Phil Laak have a bracelet?

The popular American nicknamed The Unabomber was on the list of best players without a bracelet but has broken his WSOP duck. Other poker greats waiting to get off the WSOP shneid include Ike Haxton, Jason Koon and Dan Smith.

Who is the best heads up no limit player?

There’s no purer form of poker than heads up play. Of the current bunch, the player we’d least like to face across the felt two-handed is Justin Bonomo. The 36-year-old has three WSOP bracelets and live tournament earnings of over $48 million.

Is poker luck or skill?

Poker is undoubtedly a game of skill. To go deep in a big tournament, you’ll usually need to get lucky a few times though.